We are lucky this week to have a special blog post written by our brilliant Living Life to the Fullest Co-Researcher Carrie Aimes. Carrie writes her own blog, Life on the Slow Lane, which you can find here. 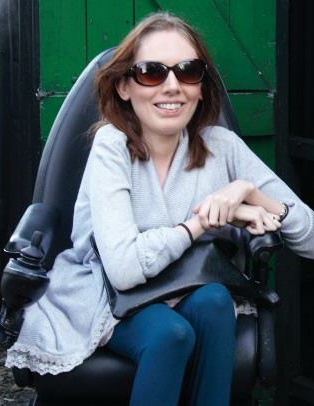 Though I’d rather not admit it, I have a pretty big birthday coming up. In just over a week, I turn 30! It might not seem like much of a milestone to most people. But for those of us with muscular dystrophy, 30 is a big deal.

I’ve never really considered or cared much about age. Getting older has never bothered me, and I didn’t think I’d be fazed by reaching the big 3-0. But I’ll be honest, it is getting to me…just a little.

For various reasons, I’m not a fan of my own birthday at all. I’d rather it went unacknowledged and unnoticed. I hate any form of attention and am much happier when the focus is on other people. I’m definitely more of a hide in the corner type!

Back in October, I went on a five-day cruise to Amsterdam and Bruges, to celebrate my birthday. There are no other upcoming plans (at least, none that I’m aware of).

Those closest to me know I don’t like surprises (perhaps I am a bit of a control freak). So, if anything, all that’s left to come is a small family gathering – basically Sunday roast with the folks, the brothers, my sister-in-law and baby nephew. And that suits me just fine!

Accept it or not, the sad fact is, muscular dystrophy is a life-limiting condition. I’m aware of others who were told by medical professionals that they shouldn’t expect to live beyond the age of 20 (if that). In contrast, my parents and I were never given any indication whatsoever of my life expectancy. At no point were we told, ‘Carrie won’t reach adulthood’. Perhaps my consultants were being overly cautious. Perhaps they were just clueless! (I suspect the latter).

In a way, this allowed me to grow up in a state of blissful ignorance. For a long time, I believed I had just as much chance of growing old and wrinkly as the next person. It wasn’t until my late teens that I realised this wasn’t the case.

Now, I don’t want to get all deep and downbeat – just trying to keep it real (on the advice of certain people. You know who you are!).

Essentially, for better or worse, life has taught me to expect nothing. Expectation often leads to disappointment. These days, I try to go with the flow, I don’t make long-term plans or look too far into the future. I prefer to focus on the here and now.

Right now, I’m going to hold on to my youth for as long as possible by continuing to laugh at silly, childish things. I’m all about laughing, playing and having fun – believe me, I’ve had more than my fair share of serious!